In celebration of my 100th day on the GAPS Diet, I’d like to introduce the very first “Into Your Hands” blog. As many of you know, my husband Ryan and I own a small business by the same name, which, until late, has mostly dealt with his books and speaking engagements. (See more at http://www.intoyourhandsllc.com/) We’d like to expand into the blogosphere with some information about intentional living and natural food. And now that we have 100 Days of GAPS under our belt, I’d love to share more with you about this journey! 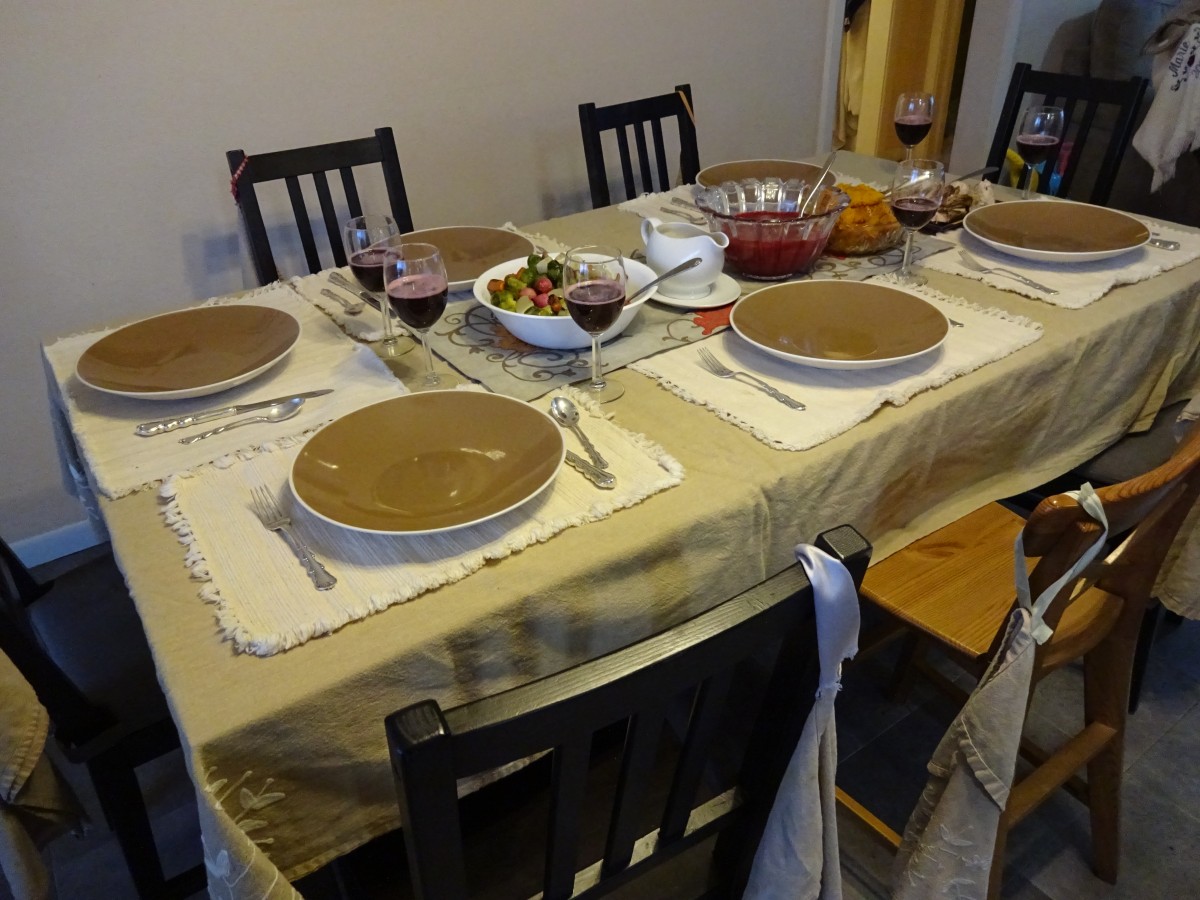 The GAPS diet differs from the Standard American Diet in three ways. One is “illegal” foods, the second is foods that must be consumed, and third is optional choices.

In the first group, the “illegal” foods, we have cut all grains, starchy vegetables, and sugar from our diet. Yes, that means for over 3 months, I have had nothing with added sugar, and absolutely no bread! We had been eating gluten-free for a long while before starting GAPS, but even gluten-free food contains a LOT of starch (think potato flour, tapioca starch, rice syrup). In the GAPS book (Gut and Psychology Syndrome), Dr. Natasha Campbell McBride, MD, states that these types of foods serve as nourishment to both bad bacteria in the gut and also yeast or other parasites taking up residence in the body. By cutting out these foods, the idea is to starve and kill the troublesome organisms in the body. We also do not eat anything processed and sold in the grocery store. All of our food is home made and we can pronounce each and every ingredient.

The second change for us is including many wholesome foods in our diet daily. Sprouting and fermenting foods was not new to me. (I can thank some dear friends for introducing me to Nourishing Traditions by Sally Fallon.) But we were not including these superfoods in our diet at every meal. My nutritionist has me eating something fermented at every meal and drinking up to 16 ounces of broth a day. Why eat fermented foods? For exactly the opposite reason as starving the bad bacteria! Home fermented foods are rich in healthy probiotics, and eating them at every meal constantly replenishes the gut with these goodies! I wasn’t really a fan at first, but now, this category of food is really growing on (or should I say “in”?) me! I very much enjoy lacto-fermented salsa, milk kefir, and fruit kvass.

There are other delicious necessities on the GAPS diet. One is sea salt. All of the minerals are very healing. I use some in my broth every day, as well as drinking some in my water in the morning and afternoon. (Remember, since we are cooking EVERYTHING at home, we don’t have to worry about “added” sodium in boxed or prepared foods.) Another important food is wholesome, natural fat. Besides furnishing a majority of the calories in the diet, lard, butter, ghee, coconut oil, palm oil, and EVOO provide a means by which the nutrients in the other foods can be absorbed and used by the body.

The third group consists of GAPS legal foods, any of which one can consume, as long as they are as fresh and as natural as possible. Most individuals embarking on a GAPS diet have digestive or other health issues, and to eat conventional produce can really tax the liver and kidneys with the unnecessary work of filtering out pesticides and toxins. Plus, organic produce is usually higher in vitamins and minerals than conventional, which is always a good thing. These foods include meats, organs, properly prepared nuts and seeds, non-starchy vegetables, fermented dairy, fruit, and honey. (Honey’s chemical structure does not allow it to be used as food by pathogenic bacteria. Hooray for God’s sweetener!)

Of course, many of the optional foods are not appropriate for me because of my individual food intolerances (beef, eggs, almonds, etc). However, I do have the hope that once my gut is able to heal, we can reintroduce some of these goodies.

The foods described thus far are known as “Full GAPS.” There is also a set of restrictions, in six different stages, known as the “Intro to GAPS.” Going through these stages can speed healing, but it is not recommended for everyone, including pregnant and nursing mothers (me!), due to the speed at which the body detoxifies, which may possibly be too much for a baby’s system to handle.

Why did we start the GAPS Diet?

Now that you know the “what” of the GAPS diet, perhaps you are wondering the circumstances for my family that precipitated this dramatic change in the way we eat. In many ways, I feel that God has been preparing me to undertake this challenge for all of my married life. My husband taught me to cook while we were dating. We were married only a week when a dear older lady from church took me under her wing and taught me how to bake bread “as every good wife should!”

Once we were blessed with children and the diagnosis of autism for our oldest, we became familiar with gluten- and dairy-free eating. Soon after, I was diagnosed with multiple food allergies. Once I had avoided those allergens for long enough, I was encouraged to slowly reintroduce them, but only eat them once every 4 days (hello, Rotation Diet). Later, as I attempted to lose the weight put on from 4 babies, I was introduced to low-carb eating via the Paleo/Primal Diet, and low-glycemic eating through Trim Healthy Mama. Each had some truth and some good and some healing involved. But it wasn’t until I re-read the GAPS book that everything came together. (Yes, I had partially read it a few years ago. I remember putting it back on the shelf, thinking, “There is NO WAY we could possibly eat like that. I’m so grateful I don’t have those problems.” At least not yet!)

Nearly a year ago, we were blessed with our fifth child. Though I healed maternally from her birth, I never felt “good” afterward. I found some relief after having my tail bone adjusted by a chiropractor, but my energy was still sapped beyond recognition, and I was scared. To some extent, that feeling is normal when one has a newborn, and yet it was different than I remembered with my other newborns. I also was dizzy whenever I changed positions, so much so that I began to fear driving.

Then, the migraines started. About once a month, a headache would start around noon, and grow into the afternoon, and I would have to go to bed to sleep it off, feeling nauseated the whole time (and sometimes, I did throw up). Then, they increased in frequency to every week. I was also having overwhelming stomach pain. So, in the late spring, testing began. I was diagnosed with dangerously low cortisol levels (also known as “adrenal fatigue”), which I would need to turn around before my adrenal glands were beyond the point of no return. This diagnosis was an answer to prayer, and I started some supplements to assist with repair. However, I also knew food was involved when I had two scary hives episodes during the summer, that nearly turned into anaphylaxis. My body was just overloaded with (new) food allergies (again...), as shown through (yet another) food allergy panel.

At the suggestion of my practitioner, I also ordered a “leaky gut” test through the mail to ascertain whether or not intestinal permeability was contributing to my changing food allergies. The results came back that my permeability was so high that it was almost unheard of! As I researched, I found several types of treatments that seem to “patch” intestinal permeability, but it looked to me that GAPS was the only plan to cure it. I owed it to my family to get better and get back into my role of wife and mother. And my husband and I decided that since our whole family has some GAP symptoms (rosacea, ADHD, autism-spectrum, etc), we would journey together on the diet. (And, I didn’t complain...what Mom wants to cook separate meals for herself and her family?!)

Three months later, after embarking on our GAPS eating adventure, with the addition of digestive enzymes and therapeutic strength probiotics, my migraines have disappeared, and so has my dizziness. I still have a long way to go to heal—including getting back my energy and vitality (and PATIENCE with my kids!), slowly building back up my adrenals, overcoming brain-fog, and healing some skin reactions indicative of an overtaxed liver. However, I am very thankful to once again have the life of a “normal” tired mom, which, 4 months ago, I was afraid I would never again have.

What’s next? 100 days of GAPS down, 900 to go? My nutritionist has counseled me to expect 3 years on the diet due to the severity of my symptoms. That seemed unreal at the time. No mashed potatoes for 1,000 days? No, thank you! But now that I’ve improved so much in 100 days, I can’t imagine retreating from the battle now! If I’m already 1/10 of the way there, how much more healing will I be able to achieve in the next 9/10 of the war?

We praise the Lord for His guidance and healing achieved through His creation!