Searching for the Star of Bethlehem with Stellarium

Using Stellarium, an open-source astronomical simulation program, my children and I have embarked on a quest to discover, if possible, the Star of Bethlehem.

We realize that a number of competing theories have been advanced, each with their own strengths and weaknesses in terms of biblical conformity, historical plausibility, and astronomical accuracy. So, I’m not announcing that we’ve got the right answer. I’m simply sharing part of an exciting journey.

We have configured Stellarium to reveal the sky as seen from Bagdad, as a close proxy for where the Magi may have been when they saw “His star in the East.”

Now after Jesus was born in Bethlehem of Judea in the days of Herod the king, behold, wise men from the East came to Jerusalem, saying, “Where is He who has been born King of the Jews? For we have seen His star in the East and have come to worship Him. (Matthew 2:1–2)

Following the biblical-historical-astronomical reasoning of Frederick A. Larson’s Star of Bethlehem project, we have produced the following images, revealing the close conjunction of Jupiter (also known as the King Star, and called Righteousness, literally, in Hebrew) and Regulus (the “heart” of Leo, the lion constellation—perhaps also related to the “Lion of Judah,” referenced in Genesis 49:9 and Revelation 5:5?). 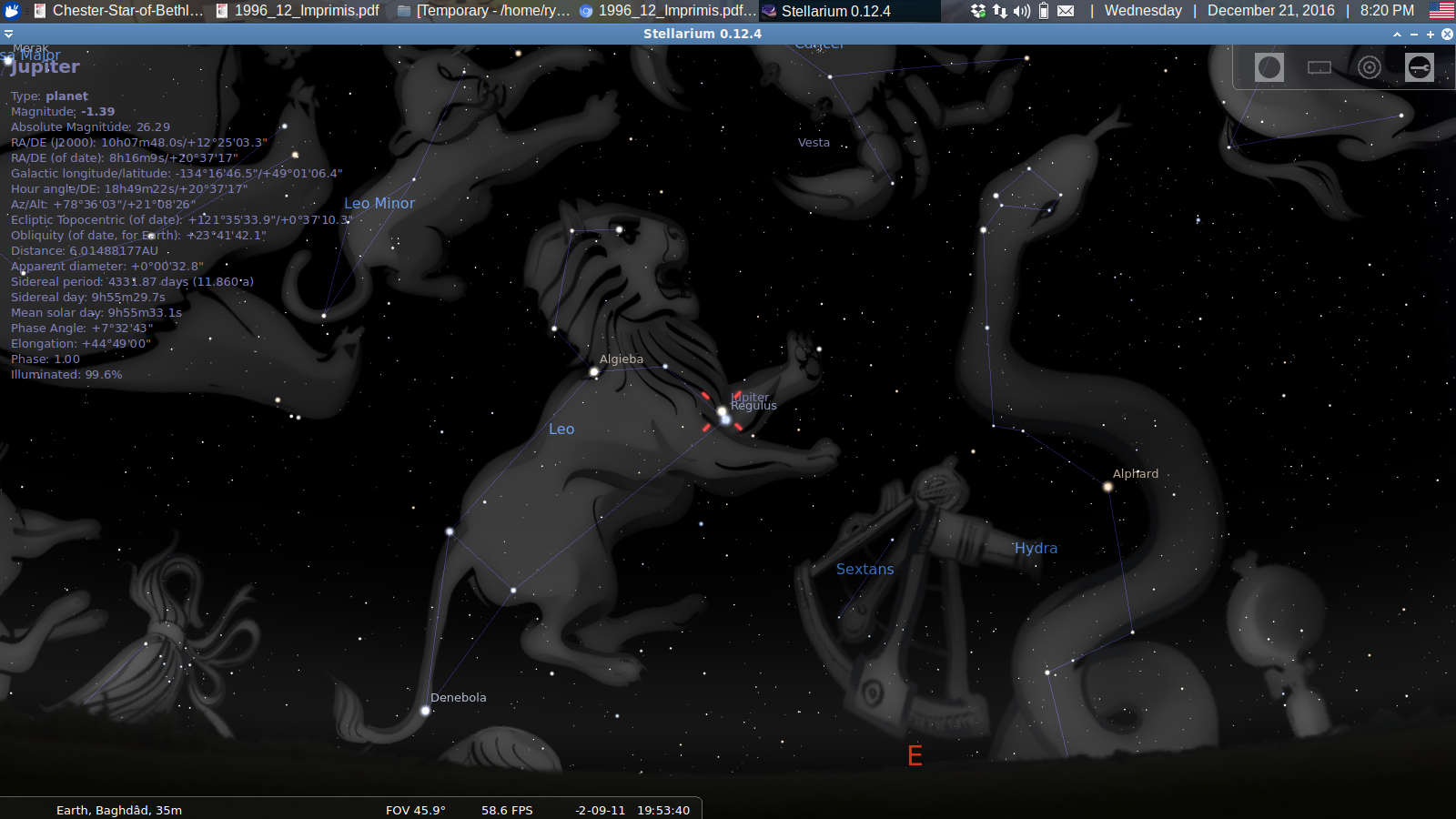 Larson, an attorney, arrived at his conclusions largely by following the work of Craig Chester, an astronomer, who suggested a revision of the date of King Herod’s death from 4 B.C. to 1 B.C., and a corresponding shift in the birth of Christ from 5 or 4 B.C. to 3 or 2 B.C. The revised dating of Herod’s death resulted from a reinterpretation of historical texts. As for astronomy, Chester discovered a number of close conjunctions between Jupiter and Regulus in the fall of 2 B.C.

Two things have always struck me about the Matthew account.

First, the Magi announced quite matter-of-factly that they had seen “His star in the East,” as if it should be obvious that the newborn Messiah would have a star all his own. “A Star shall come out of Jacob; a Scepter shall rise out of Israel,” reads a prophecy recorded in Numbers 24:17. It is furthermore interesting that Daniel was appointed chief of the Magi—wise men, astronomers—in Babylon (Daniel 5:11). The same angel Gabriel who revealed the timing of the Messiah’s coming to Daniel (Daniel 9) also spoke to Mary when Christ was conceived (Luke 1). Mindful of God’s careful scheduling, Paul later wrote that Christ was born “when the fullness of time had come” (Galatians 4:4). The Jewish leaders were nervously expecting the Messiah to identify himself just when Christ was about to begin His adult ministry (John 1:19–27). The idea that a star would mark both the time and the place of the Messiah’s coming fits this larger pattern of salvation history: God has arranged all events according to His grand plan for bringing the Savior into the world.

Second, the star stopped to mark the Messiah’s location: “the star which they had seen in the East went before them, till it came and stood over where the young Child was” (Matthew 2:9). For this reason, many people have concluded that the star of Bethlehem was not a natural occurrence or an ordinary star, but some other phenomenon, perhaps in the Earth’s atmosphere rather than in the starry vault above. Chester and Larson instead suggest that Jupiter paused at a turning point in its retrograde motion—something that the “wandering stars,” or planets, naturally do, and yet in this case with a timing that proved highly symbolic. This latter interpretation coheres with the purpose for which God created the stars in the first place—as a celestial calendar. “Then God said, ‘Let there be lights in the firmament of the heavens to divide the day from the night; and let them be for signs and seasons, and for days and years.’” (Genesis 1:14).