How to Easily Compose European Accent Characters on Linux (a.k.a., putting that Windows hot key to productive use)

If you’d like to take a swing at a piñata, inquire about someone’s fiancé, price your global exports in € or £, or express über-excitement about something, then you’ll need to type some special characters. You can do so in less than ½ the time you might think it would take. Here’s how it works in the Ubuntu family of Linux distributions:

Go to Settings Manager [or a similar system tool, depending upon your Linux distro] >> Keyboard > Layout and at:

You may select a different key, such as the Left Alt key, but you likely are using most of the keys in the list for other routine tasks already (e.g., Alt-F to access the File menu in most applications). Selecting Left Win will not interfere with your other “hot keys,” but it will put the Windows key to good use while running Linux!

Here are some examples:

With a little practice, you’ll be able to type these characters nearly as quickly as you type ordinary characters.

3. Review This Chart for More Ideas 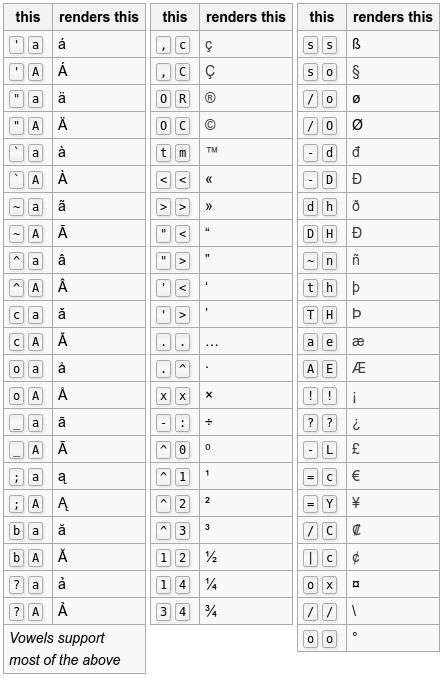 Looking for something more? The Ubuntu documentation provides a more comprehensive list of compose-key patterns, and if that does not satisfy your needs, you can even invent your own custom key compositions!

4. How to Type Professional-Looking Dashes on the Fly

To type an en dash (a medium dash for separating numbers, “1776–1783”) or an em dash (a long dash for separating phrases, “The suprising thing—and for some people it comes as quite a big suprise—is that Linux is both easy to use and affordable.”), simply enter the following series of keys:

The Keyboard Layout tool (see Step 1) also allows you to select from among a dozen or more English international keyboards, some of which use “dead keys” to produce accents. I recommend against this approach, since those keyboard layouts tend to borrow keys that you already are using for other purposes. You may discover, for example, that when using a “dead key” international keyboard CTRL-S no longer serves as a shortcut for saving a file, but instead produces some sort of special character. If, however, you follow the procedure outlined above, all of your favorite command keys will continue to work in the normal fashion.