Trump vs. Biden: Looking Ahead to the December 14, 2020 Presidential Election

For nearly 20 years, I have taught U.S. history to college students. I call out out, “Who elects the president?” and they learn to respond in unison, “the electoral college!” At least that’s usually the correct answer. 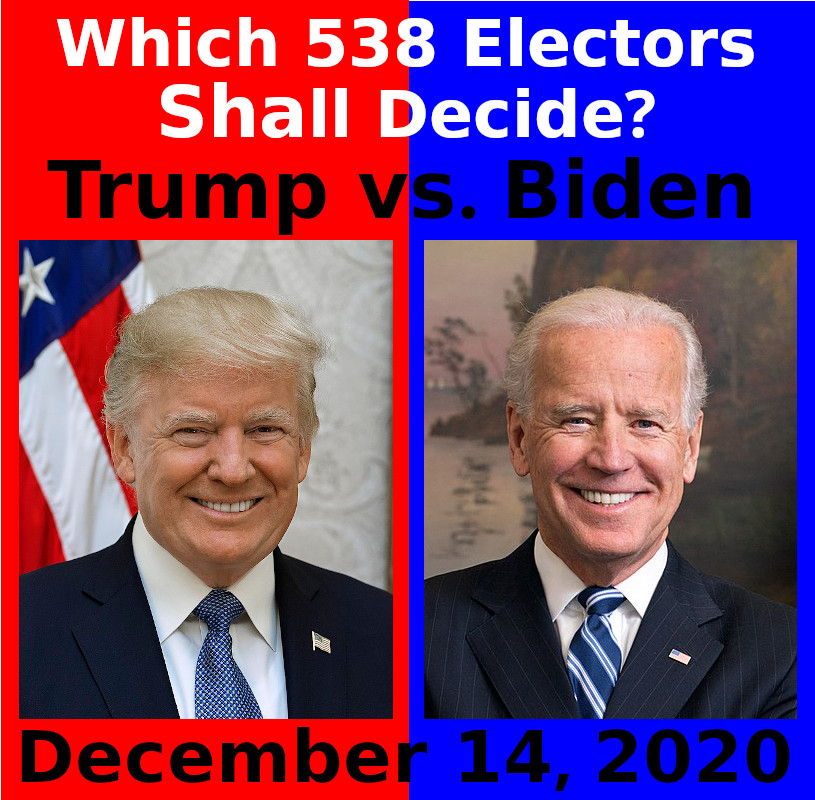 However, In 1800, 1824, and 1876 (stretching into 1877), the U.S. House of Representatives elected the president, since no candidate received more than half of the certified electoral votes. In 2000, the electoral college still chose the president, but with a unique twist: the U.S. Supreme Court determined which group of persons would be the official electors from Florida: those pledged to vote for Bush, rather than those pledged to vote for Gore. That was the resolution to concerns about miscounts, fraud, and the like, that precipitated lawsuits at both the state and federal level.

In 2020, we are headed down a similar path once again—similar, but not identical.

November 3 was election day. People voted both by mail and in person beforehand. Ballots continued to arrive afterwards. Along the way, the tallies of votes in about five key swing states vacillated between the candidates. The Trump campaign filed lawsuits and demanded recounts. On November 7, several news bureaus called the election in favor of Biden—at times naming him the “president-elect” and the “46th president,” but at times also including qualifiers such as “projected.” That evening, Biden delivered a celebratory speech, as did his running mate, the projected vice president-elect Kamala Harris. Several world leaders congratulated Biden-Harris. Meanwhile, the Trump campaign announced the intention to file lawsuits, beginning on Monday.

So, is the matter final, or not?

If you believe that the news bureaus determine the answer, then it’s settled: Biden has won.

If you believe that the consensus of prominent world leaders determines the answer, then it’s settled: Biden has won.

If you believe that the popular vote determines the answer, then it’s settled: Biden has won by a margin of about four million votes.

But knowledge and belief are different.

My dear friend Plato and many other philosophers after him have defined knowledge as “true belief together with a reason why.”

So, do you know that Biden has won? In other words, is your belief about his victory a true belief, and can you state the reason why it must be true?

Remember, this is America. So, the “reasoning” part of your answer must refer to the electoral college.

Here’s the rub: the electoral college—that group of 538 presidential electors who have constitutional authority to elect the president—will not meet until December 14, 2020. Moreover, as of this moment, we still don’t know which people will be those electors. Remember, the popular vote is contested in about five key states. Ordinarily, the popular vote determines who the presidential electors will be from those states—a slate of Republicans pledged to vote on December 14 for Trump, or a slate of Democrats pledged to vote on December 14 for Biden.

Perhaps a recount will settle the matter of electing the electors.

Perhaps a court ruling will settle the matter of electing the electors.

Perhaps the matter will be settled by neither a recount, nor a court ruling, nor the media’s summary the current vote tallies (which may or may not include fraudulent votes—that’s for the courts, not me, to figure out).

Congress is scheduled to meet on January 6, 2021, to certify the electors’ 538 votes and determine whether either candidate has attained the 270 minimum required for election to the presidency. If Congress certifies one candidate at 270+, then that candidate will be inaugurated as president on January 20. If Congress cannot establish a consensus for either candidate at 270+, then the House will vote to elect the president, with each state receiving one vote—blue California and red Wyoming will be evenly matched. The Senate will convene to elect the vice president. Whether the House and Senate choose candidates from the same party or from different parties is entirely up to them.

But mark this: If some other sort of process unfolds instead, then whether your favorite candidate wins or not is beside the point; we all will have lost our constitutional republic.

Confused? Then it’s time to put your beliefs on hold and seek knowledge—true beliefs supported by reasons. I recommend starting with this report by the Congressional Research Office, which cites pertinent sections of the U.S. Constitution and federal law. Consider also this resource provided by the National Archives.

Finally, if you feel cheated by the electoral college, then you’d better check that belief, too—since the residents of over three fourths of the states actually have their vote count more as a result of the electoral college. True belief together with the reason why: here.