The mysterious workings of the electoral college could lead to some surprising results. But even in a “worst case scenario,” in which twelve states determine the presidential election regardless of the wishes of voters from the other thirty-eight states or the District of Columbia, the electoral victor would still have a strong claim to legitimacy. Here’s why.

The Power of the Big Twelve

By “worst case scenario,” I mean the most slanted, tilted rendition of winner-take-all from the smallest number of states that would still suffice to win 270 electoral votes. This “worst case scenario” would hand the presidency to someone who won in merely twelve states. You see, any candidate receiving the most votes in each of the following states legitimately becomes president: California, Florida, Illinois, Michigan, New Jersey, New York, North Carolina, Ohio, Pennsylvania, Texas, Virginia, and Washington. Even if another candidate wins the remaining thirty-eight states plus the District of Columbia, the first candidate—the one winning the twelve states just listed—shall be declared the winner of the national election because the Big Twelve collectively cast 279 electoral votes. 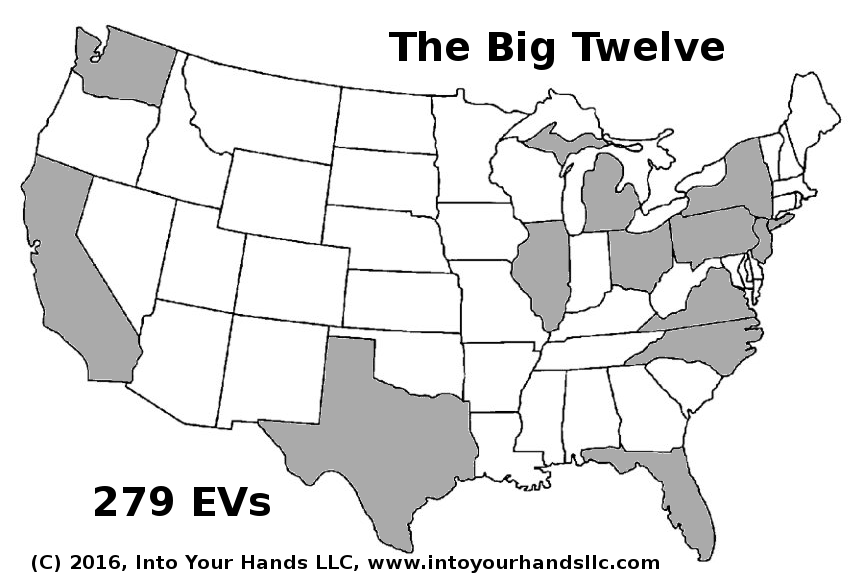 Would that “worst case scenario” be fair? Would the twelve-state victor truly be representative of America?

Before jumping to the conclusion that such a system is totally unfair, consider the facts. According to the 2010 census, those twelve states have 58% of the national population. Those twelve states cover parts of New England, the east coast, the south, the west coast, and the Midwest. Those twelve states, taken as a whole, provide a diverse sampling of the entire nation in terms of ethnicity, religion, economic activity, and a host of other factors that one might consider relevant to establishing a “fair” vote. If a candidate proved victorious in not merely a majority of these states, but all twelve of these states, that would indicate a strong national consensus in favor of that candidate.

What about the comparative strength of the two major political parties in the Big Twelve? Five of the twelve states have been blue since 1992: California, Illinois, Pennsylvania, Michigan, and New Jersey. Two others have been blue since 1988: New York and Washington. Texas has been red since 1980. North Carolina also has been red since 1980, with the exception of a blue victory in 2008. Virginia was red from 1968 through 2004, but turned blue for the last two presidential elections. Ohio has alternated evenly since 1976, as has Florida since 1992. The blues obviously have the lead, but the reds and the swings just as obviously prevent a blue monopoly over all twelve states.

Does the bluish tint mean that the Big Twelve formula plays into the hands of the Democrats more than the Republicans? Not necessarily. Remember, a candidate must have all twelve to win; losing just one of the twelve means losing the national campaign, unless, of course, the candidate also makes up for it among the other thirty-eight states (or the District of Columbia). For example, the loss of California (55) from the Big Twelve (279) would require the gain of at least five states from the Small Thirty-Eight. On the other hand, the loss of the smallest of the Big Twelve—Washington (12)—would require a compensatory gain of merely the smallest of the Small Thirty-Eight, or even the District of Columbia (3), in order to attain the minimum electoral count of 270.

Yes, the electoral college allows for an extreme example in which the prevailing candidate wins in merely twelve states—so long as these include the eleven biggest among the Big Twelve—and yet, even in that extreme (and extremely unlikely) scenario, the candidate still could claim to have won the hearts and minds of a broad sampling of the American people. Remember, the Big Twelve are home to 58% of the national population.

The Power of the Small Thirty-Eight

Still not convinced that a Big Twelve victory could be fair? Well, consider that those twelve states that cumulatively have 58% of the population exercise only 52% of the electoral votes (279 out of 538). So, in purely democratic terms, the Big Twelve are being under-represented. It is the Small Thirty-Eight and the District of Columbia that are getting an “unfair” boost in the electoral college.

Moreover, the Big Twelve hold only 24% of the total number of seats in the U.S. Senate. You read that correctly: the twelve states where 58% of the people live have only 24% of the votes in the U.S. Senate. So, is that fair? Actually, it is not only fair, but “fair and balanced.” Even if a single candidate could win all of the Big Twelve, that duly elected president would still need support from the Senate in order to accomplish a legislative agenda, to confirm judicial appointments, or to ratify international treaties. A president who won the nation by winning only the Big Twelve would still have to negotiate with senators elected from at least fourteen of the Small Thirty-Eight in order to get anything accomplished (twenty-four senators from the Big Twelve plus twenty-six from thirteen other states plus one more from a fourteenth state equals fifty-one, a majority vote in the Senate). The electoral college determines the presidency, but the checks and balances between the President and Congress determine what happens after the election, and it’s what happens after the election that matters most of all.

As noted earlier, the electoral college actually stacks the deck in favor of the Small Thirty-Eight. They are home to only 42% of the population but are entitled to 48% of the electoral votes. Moreover, they can be overpowered by the Big Twelve only in the unlikely scenario that one candidate wins all of the Big Twelve.

The Absurdity of Repealing the Electoral College

If such an amendment were to be adopted, then the nation might as well also amend Article I, section 3, which stipulates that each state is entitled to two senators. If our nation decides that it is so committed to democracy that the electoral college must go, then why not also make the U.S. Senate proportionate to population, in order to allow the Big Twelve to “have their fair say”? Well, this is what logicians call reductio ad absurdum, a reduction to absurdity. And if you don’t recognize the absurdity, then I recommend that you review your high school civics lesson on the Connecticut Compromise—the melding of the Virginia Plan (a big state wanting each state’s influence to be proportionate to population) and the New Jersey Plan (a small state wanting each state to have an equal say). According to the compromise, the House follows the Virginia Plan, the Senate follows the New Jersey Plan, and the electoral college follows a combination of both plans: each state has a number of electors equal to the sum of its senators (exactly two) and representatives (varying by population).

So now we see why we have the system we do. Even though New Jersey has now joined Virginia as a “big state,” we still need the Connecticut Compromise for the sake of the remaining small states.

No, the electoral college won’t prevent the Big Twelve from “stealing” the presidency from the Small Thirty-Eight. Nor will the Connecticut Compromise prevent the Big Twelve from ramming their favorite proposals through the House of Representatives, where they hold 59% of the seats—an even higher proportion than their electoral strength since the District of Columbia, which chooses three presidential electors, has no congressional representatives. But even if the Big Twelve were to control the President and the House, they would not get their legislation passed in the Senate without support from among the Small Thirty-Eight. Nor would their presidential favorite make any judicial appointments or finalize any treaties without some help from senators representing the little states. That is where the Connecticut Compromise holds the line.

Where Real Political Reform Must Begin

Ever since the electoral college unanimously elected George Washington in 1789, this institution has buttressed the American republic with a stability that is virtually unparalleled among modern governments. Even for those voters still clinging to the fetish of pure democracy, the electoral college almost always brings pleasure in the end. In 93% of presidential elections to date, the candidate selected by the electoral college has been the same candidate who also received the greatest share of popular votes nationwide. If there is a weakness in the system, it is not in the structure of checks and balances, which, like Newton’s laws of physics, have kept our American universe in balance. If the next president fails to represent the best interests of the American people, the electoral college will not be to blame.

What this nation needs far more than a revision of some obscure phrase in the Constitution is an amendment of the human heart, as we search to rediscover those enduring values without which no people can remain free or prosperous. When our national consensus no longer centers on those values, then no system of checks and balances can avert our doom for long. If you feel your vote is being “wasted” this election, don’t blame the electoral college. Ask yourself instead how it came about that so many of your neighbors, and so many of the people in the states that neighbor yours, cherish values that are so at odds with your own. Then go talk with them about it, and fast.