The Book of Psalms (ca. 1000 B.C.) was the hymnal of the Jewish people in biblical times and remains so today. Christians, too, have sung and prayed the Psalter since the first century. Not only does each Sunday and feast day have a designated Psalm to be chanted between the Old Testament and Epistle readings, but several liturgies that are used regularly throughout the church year feature the Psalms. For example, the Office of Matins (dating back to the early medieval period) sets Psalm 95 to music, chanted by pastor and congregants alike.

Known as the Venite (literally, “Come!” in Latin), Psalm 95 begins:

O come, let us sing to the Lord:

Let us make a joyful noise to the Rock of our salvation.

Let us come before His presence with thanksgiving

and make a joyful noise to Him with psalms.

The phrase “come before His presence” refers to a corporate gathering in the sanctuary, around the altar, from which God’s Word will be read and preached. At this altar, the Lord’s Supper also is administered.

The Hebrew word translated “sing” is not the usual Hebrew word that denotes singing in general. Rather, it is a more specific term that means singing out or shouting for joy. The Hebrew and Aramaic Lexicon of the Old Testament regards the basic meaning to be “call out shrilly, rejoice” and suggests for Psalm 95 in particular a translation of “proclaim jubilantly.”

The Hebrew word translated “make a joyful noise” means “rejoice, cheer, shout in triumph.” Some Old Testament contexts convey the notion of raising a battle cry or blowing a trumpet in jubilation. In Psalm 95, God’s people boisterously exclaim their praise and thanksgiving to God. Silent worship is not their kind of ritual. Among Christians, Lutherans in particular have developed a rich tradition of both choral and congregational singing, meriting the moniker “the singing church.”

Recent executive orders by various American governors have declared it unlawful for a congregation to gather in person. Even when phased reopening orders have permitted gathering (in reduced numbers and with social distancing), sometimes congregational singing has been prohibited. In Minnesota, the current policy is only slightly more lenient, with guidelines urging that at most one designated cantor should sing, but only when wearing a face mask and remaining at double the standard social distance (that is, 12 feet away).

In effect, the governor has censored congregations from performing an age-old ritual known as the Venite; the Office of Matins is now beyond the pale of public decency. Even the cantor, if he were to perform what should be a corporate ritual as a soloist, cannot do so in fidelity to the meaning of the lyrics: singing out, shouting for joy—muzzled behind a mask?

Let no one deny that the state government has a legitimate interest in pursuing public health and safety, but let no one mistake what also has occurred: the governor now dictates how religious groups may or may not worship. The Venite is taboo, or else must be reduced to a shallow mockery of what its words truly declare, and in its place new ritual clothing and ritual washing must be added. Until further notice, no one should administer or receive Holy Communion without wearing a mask, and everyone should use hand sanitizer immediately before and immediately after, waiting for the sanitizer to completely dry before proceeding. The governor dictated these revisions to the rite on May 27 through Executive Order 20–63, para. 6v, which in turn incorporates a checklist of requirements entitled Industry Guidance for Safely Reopening Places of Worship. 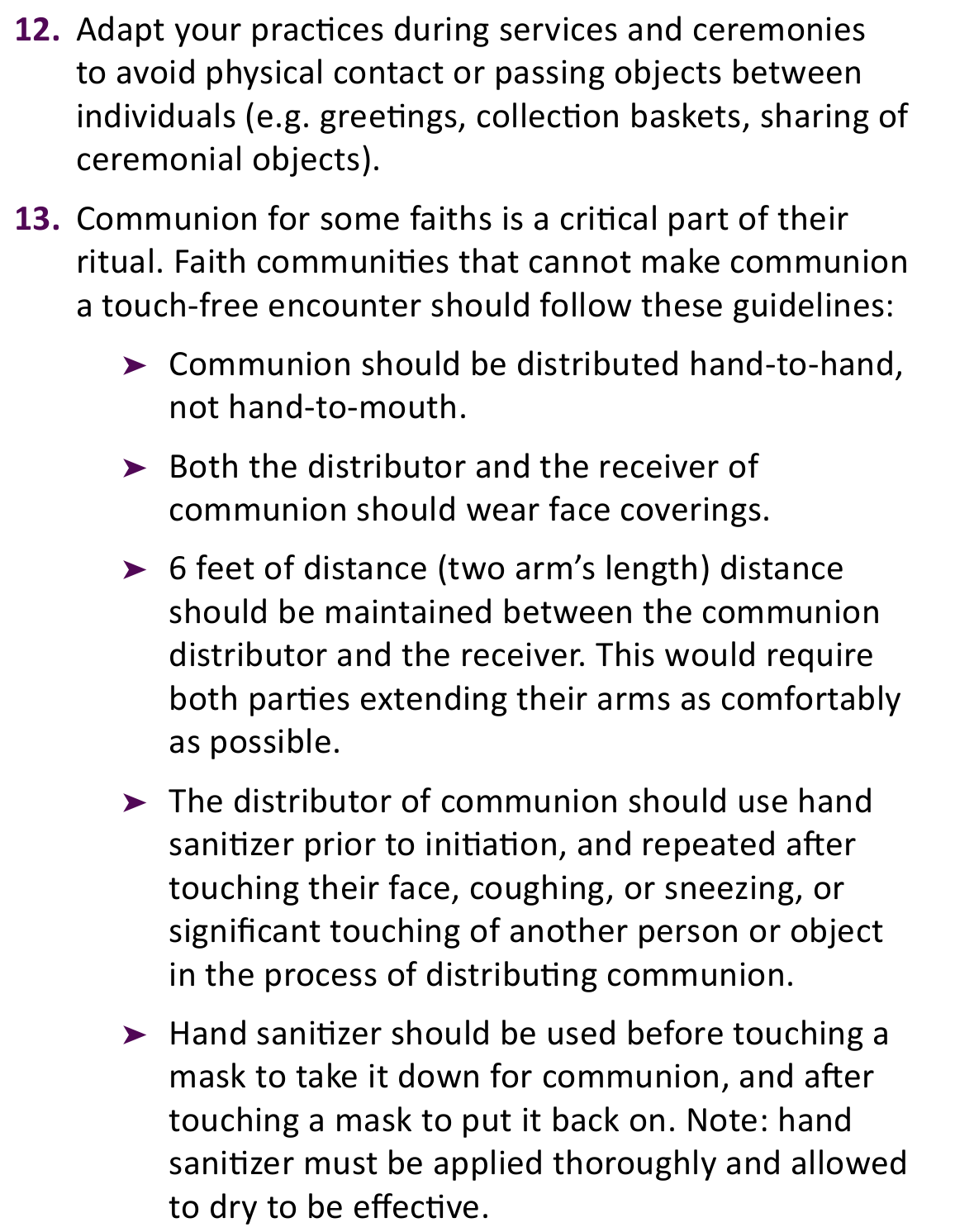 “Guidance” may sound optional, but the running footer reads “Requirements Checklist.” How much leniency are you willing to bet on? A communicant partaking of a common chalice can only do so trembling with fear of a $1,000 fine and 90 days’ imprisonment. If your pastor does not pass muster, he could be fined $3,000, spend a year in jail, and have his congregation penalized $25,000.

This is not the first time that Christians have been denied one ritual and coerced into another. In the 1500s, the Lutheran Church confessed in Article X of the Solid Declaration of the Formula of Concord: “As soon as Christian freedom is weakened and human traditions are forced on the Church with coercion, as though it were wrong and a sin to omit them [the externally coerced traditions], the way is already prepared for idolatry. In this way, human traditions are multiplied and regarded as a divine worship not only equal to God’s ordinances, but even placed above them.”

Let that last point sink in. Hand sanitizer, face masks, and the prohibition of singing are now paramount. Singing the Venite, receiving Communion from the chalice, and other longstanding religious rituals are forced to yield. State stands above. Church stands below.

It would not be so bad if these innovations came from within the church rather than from the state, but even then the church must take care what to change and why to change it. As the Formula of Concord continues: “We also reject and condemn abolishing these adiaphora [i.e., liturgical traditions that are not mandated in Scripture but have developed from church history] as though the community of God at any time and place in any land was not free to use one or more ceremonies in Christian liberty.” The purpose of this liberty is to promote the Gospel. “For ceremonies are needed for this reason alone, that the uneducated be taught what they need to know about Christ. … The people are also advised about the dignity and use of the Sacrament.” (Augsburg Confession, Art. XXIV) The governor, by narrowly circumscribing which rites receive a green light, has first constricted and then usurped the teaching office of the church; by revising the rite of the Lord’s Supper, he has desecrated the sanctuary and absorbed the altar into his secular realm. Like Henry VIII, the governor has become both king and pope, instructing churchgoers not to pass the offering plate or share a hymnal, even while encouraging restaurant patrons to “pass the food down the table or pass plates back to the server” (as you may read for yourself). 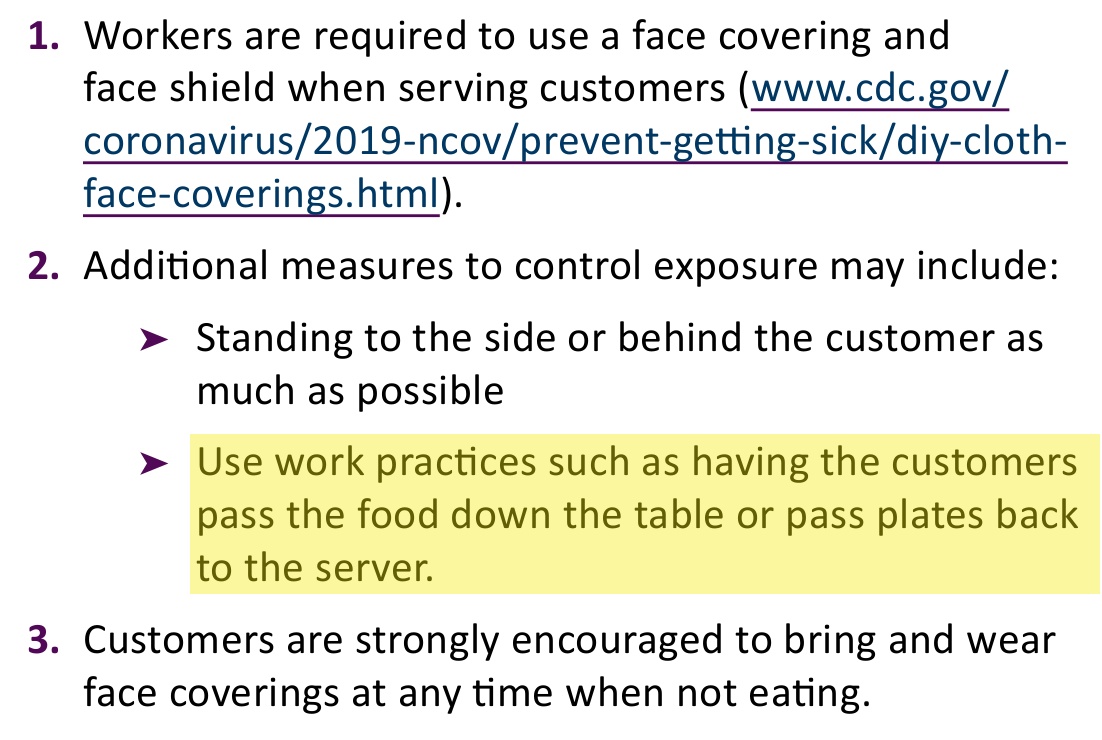 As for the state’s public-health justification for its restrictions upon the church, the Supreme Court has ruled consistently that the state must have a rational basis, must treat churches equally with other similar organizations or activities, and in fact must treat churches even better than equally by pursuing the least restrictive means possible to secure the secular purpose of public health. I know this to be true not only because I have taught Supreme Court history to college students for two decades—a number of whom have been admitted into the nation’s leading law schools with substantial scholarships—but also because the U.S. attorney general recently summarized the matter in exactly the same outline as I teach it. He was asserting the right of a Baptist church to host public worship, arguing that a city’s enforcement of an emergency health order violated the Constitution. There is nothing novel in my application of the same Constitution to the current executive order in Minnesota.

Nor do I rashly use “persecution” in the title above. As Justice Antonin Scalia wrote in concert with the majority of the Supreme Court, “A tax on wearing yarmulkes is a tax on Jews.” The Lutheran Church has long been known as the “singing church.” A prohibition of singing is a persecution of Lutherans.