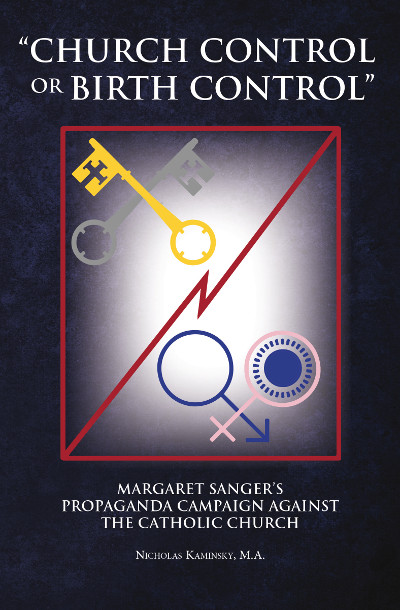 “All who resent this sinister Church Control of life and conduct – this interference of the Roman Church in attempting to dictate the conduct and behavior of non-Catholics, must now choose between Church Control or Birth Control. You can no longer remain neutral. You must make a declaration of independence, of self-reliance, or submit to the dictatorship of the Roman Catholic hierarchy.”—Margaret Sanger, 1921

The name Margaret Sanger is nearly synonymous with birth control in the United States. A controversial character even now, she founded the predecessor to today’s Planned Parenthood and dedicated her life to working tirelessly for the legalization and promotion of birth control and abortion.

While scholars have directed some attention toward Sanger’s provocative statements on race and ethnicity, few have documented her vehement anti-Catholicism or shown the way she cleverly used anti-Catholic propaganda to promote her birth control crusade. Kaminsky has now done so. In this book, he demonstrates the way in which Sanger exploited powerful anti-Catholic sentiment in the United States to portray her fight for birth control as a struggle for American Freedom against a moral domination by the Catholic Church.

Kaminsky further demonstrates that Sanger did not choose this course as a matter of mere convenience, but that she genuinely viewed the Catholic Church as her arch-enemy in a battle to overturn the traditional moral order of western civilization and usher in a new era based upon a pragmatic moral code. Anyone seeking to understand the displacement of Judeo-Christian morality from the American public square should read this book.

In his compelling new volume Church Control or Birth Control, Nicholas Kaminsky ably documents the truly radical nature of Margaret Sanger’s birth control campaign. Her effort to apply “democracy” to morality actually represented a revolutionary challenge to the whole of Christian sexual ethics and moral order. Accordingly, her legacy lies not only the contemporary “contraceptive culture,” but also in the subsequent regimes of “no-fault divorce” and “same-sex marriage.” This compact book deserves every Christian’s attention.

In this book, Nicolas Kaminsky focuses on Margaret Sanger’s use of the Catholic Church as a whipping boy to further her goals of birth control, abortion, and eugenics. Sanger succeeded in her objectives largely by making it appear that the Church created morality, when in reality the Church merely sought to reflect the genuine morality that exists because of the moral “laws of nature and nature’s God” as we say in our Declaration of Independence. History is largely the history of ideas, and this work properly focuses on the ideas most relevant to the influence of Sanger and prepares the reader to see how those ideas have influenced all of American life. It is an important contribution to the history of the United States.

Nicholas Kaminsky has shed light on Margaret Sanger’s unmitigated hatred for the Roman Catholic Church and, in doing so, has drawn attention to the deep divide that exists between Christians and secularists. One side views humans as made in the image of God, and new humans as blessings with intrinsic worth and value, and the other views humans as recently emerged from pond scum—with obvious implications. Those who are interested in the ideological foundations of the abortion movement may be surprised to learn how much Sanger herself saw her views as diametrically opposed to Christian values, in particular as maintained by Catholics.

Kaminsky is part of the new breed of Christian historians who shines fresh light on an old topic. Margaret Sanger is well known, but the centrality of her anti-Catholic message in trying to build mass appeal among Protestants has not been fully appreciated. Kaminsky always lets Mrs. Sanger speak in her own words, and the evidence is overwhelming.

Nicholas Kaminsky earned a B.A. in History from Bethany Lutheran College, Mankato, Minnesota in 2008 and an M.A. in History from Minnesota State University, Mankato in 2011. While in graduate school, he focused on the area of religion in the United States. He has taught a broad range of history courses, from ancient world civilizations to modern America, at Bethany Lutheran College, with additional teaching experience at Blessed José Sánchez del Río Minor Seminary, Mankato. He has also presented research in several scholarly venues and has worked on a U.S. congressional campaign. When he is not busy poring over old books or microfilm, he enjoys the outdoors, good food, and time spent with family and friends.

This book is available for purchase at Amazon.com. To request bulk orders for resale, please contact Into Your Hands LLC.